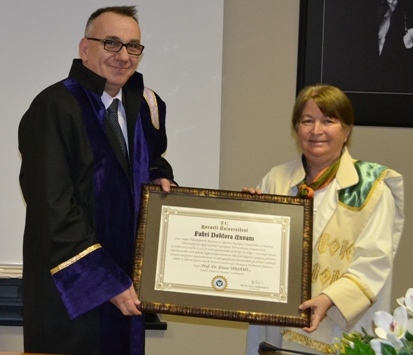 The President of the Constitutional Court of the Republic of Kosovo, Prof. Dr. Enver Hasani, on Tuesday 19 March 2013, has been awarded with the title Doctor Honoris Causa, by the University Kocaeli in Izmit, Turkey.

Following the award ceremony and presenting of the title by the Rector of the Kocaeli University, Prof. Dr. Sezer Ş. Komsuoğlu, President Enver Hasani delivered a speech in front of a wide audience with university professors, academics, and representatives of the Turkish political life.

During his speech, President Hasani among other things said that he feels highly honored with the title awarded, adding that he considers it as a special honor for the science, culture and education of the Republic of Kosovo, as well.

Kocaeli University, one of the most renowned state universities of Turkey, whose academic units and research centers cover an area of 650 000 square meters, is also one of the largest universities in Europe. The great reputation that it enjoys not only in Turkey, has made University Kocaeli an educational institution attended every year by over 60 thousand local students, along with international students from 64 countries around the world.

* You can watch the award ceremony of the title Doctor Honoris Causa on the following link: https://www.youtube.com/watch?v=845_wkHH6JY